There’s no way around it: I’ve been a decorating Grinch this Christmas. Every year in the past, one of my highlights for the season has been the annual Christmas tree tradition. As a kid, I loved choosing the perfect tree to chop down and then hanging all the ornaments—the white dove from Grandma, the little ballerina shoes from Aunt Mary, the now-eyeless clothespin reindeer I’d made in second grade. When I got my own place, I made it my priority—ahead of a couch and a kitchen table—to get my own artificial tree, and I’ve been putting it up faithfully ever since.

Mom tells me this yuletide fatigue shouldn’t set in for another 20 years or so, but for whatever reason, I’ve been prematurely struck by the grinchies. As I dug through my Rubbermaid tubs full of Christmas paraphernalia, tossing aside decorations that seemed like too much effort, I realized there was only one nonnegotiable item I simply had toput out: the Advent wreath.

I can’t quite put my finger on it, but there is a beautiful, mysterious kind of anticipation about watching those cold, lifeless wicks burst into flame like so many miniature stars of Bethlehem. The Light of the world, intercepting our darkness.

I find it interesting that two of God’s most dramatic intersections into history—when he created the world and when he broke through heaven to put on human skin—are both marked by light. The very first chapter of Scripture records God’s declaration “Let there be light” (Genesis 1:3). Then when Jesus arrived on the scene, he was revealed as “the light of the world” (John 8:12).

And there is good news for those of us who still struggle to stave off the darkness, to hold at bay the terrors of the night. According to Paul, God’s light is not confined to the first day of creation or to the 30-some years Jesus walked the earth:

God, who said, “Let there be light in the darkness,” has made this light shine in our hearts so we could know the glory of God that is seen in the face of Jesus Christ.

When the early Christians created the church calendar, they decided to celebrate Christ’s birth at the end of December. More likely, Jesus was born sometime in the spring, but the goal was to trump the pagan holiday marking the winter solstice. And really, what better symbolism could you find to mark the arrival of the Light of the World than to set aside the darkest day of the year, knowing that each day after that point will be filled with more and more light?

Yes, there may be a hole in the living room where my Christmas tree should be, but I do have a four-candled reminder of the Light who made his entrance that first Christmas.

He’s the Light that bursts through my darkness.

He’s the Light that grows stronger and brighter with each passing day.

He’s the Light that shines not only in Bethlehem, but in my heart. 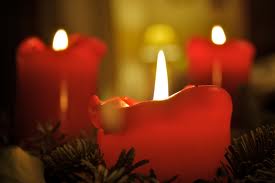 What Christmas decoration is a must for you to put up each year?

I’ve taken the challenge of reading the Bible chronologically this year and tracing the thread of grace through it. These musings are prompted by my reading. I’d love to have you join me: One Year Bible reading plan.