Book of the Month Discussion: And the Mountains Echoed September 27, 2013

Thanks to everyone who participated in our virtual book club about And the Mountains Echoed, which I introduced here. 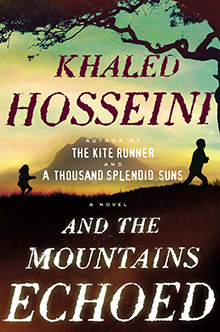 Here’s how it works: I’ll throw out a few topics for discussion, and you can write your responses about these topics (or others you’d like to discuss) in the comment section.

This book is stitched together with the best and worst of family relationships—both profound love and the worst kinds of betrayal. It was fascinating to explore what happens to families under extreme circumstances—how some parents gave a child away in hopes of a better life for her and how others sacrificed everything to give their children a better life; how one mother left her daughter to fend for herself while other parental figures stepped in to love children who weren’t their own; how tragedy drew some siblings closer than ever and pushed others apart.

I also noted a recurring theme of children being separated from their families (Pari being split up from her biological family and particularly her brother, Abdullah; Pari losing her adoptive mother to suicide; the injured girl Roshi being torn from her murdered family; Talia being left by her mother, Madeleine). The book says that Pari has always felt “the absence of something, or someone, fundamental to her own existence. . . . Sometimes it was vague, like a message sent across shadowy byways and vast distances, a weak signal on a radio dial, remote, warbled. Other times it felt so clear, this absence, so intimately close it made her heart lurch.”

This book seems to claim that families can love us the best and hurt us the most. Do you agree or disagree? Do you think there are situations where it’s best for a child is to be separated from his or her family?

Discussion #2: A Peek into a Different World

I read Hosseini’s first book, Kite Runner, on a plane ride to Thailand, and when I returned home, I remember feeling like I’d traveled to two different countries on that trip. The author painted such a clear picture of Afghanistan that I felt like I’d been transported to that world. I felt the same way with And the Mountains Echoed. Hosseini has a gift for bringing places to life, and I enjoyed reading about Kabul through the eyes of story and characters rather than just the lens of the news.

What did you think of this book’s portrayal of Afghanistan? Did it make you want to visit?

It took me a while to figure out how all the characters and stories tied together. This might have been especially problematic for me because I listened to it and couldn’t flip back to be reminded about certain characters, but at any rate, it took me a while to get my bearings. Once I figured out that the stories were all satellites from Abdullah and Pari, I was able to piece things together, but I wish the author had made it clearer from the beginning.

What did you think of the author’s style? Did you like the approach to tell multiple stories, or do you wish he’d focused more on one character’s story?

The book opens with Saboor’s bedtime story to his children about the div (which I gathered to be something of an ogre). It seemed like an odd place to start at first, but as the book went on, I decided it was a perfect setup for the difficult decisions the characters (and especially the parents in the stories) had to make. The father in the tale did the unthinkable—he sacrificed his son for the sake of the rest of his family—but the father came to believe that was the safest thing for him. Saboor himself had to make a similar decision to let Pari be raised by the Nila. Throughout the book, other characters are forced to make similar decisions that have no clear black-and-white answers.

I discovered that this book’s title is taken from a poem by William Blake called “Nurse’s Song: Innocence,” which refers to hills echoing with the sound of children’s voices. The last stanza has a haunting feel that’s reflected in Hosseini’s book. The children he writes about who grew up on the tumultuous playground of Afghanistan—they were just children, but they had to see so much.

I would give And the Mountains Echoed 4 stars for the emotive storytelling and the vivid way it brought an unfamiliar culture to life.

How many stars would you give this book?

{Remember: There will be a free book giveaway for one lucky commenter!}

6 Responses to “Book of the Month Discussion: And the Mountains Echoed”