One of the highlights of Sunday school when I was a kid was after music time, when the teachers would pull out the big blue Flannelgraph board.

I loved hearing the stories about all the old Bible heroes—especially when Pastor Bob was the storyteller. He had a way of recounting Scripture in a way that made me scoot to the edge of my little carpet square, eager for a front-row seat to the unfolding action. Along with Noah, I could practically smell the monkeys on the ark. I could hear the buzzing of the flies when the plagues hit Egypt. I felt the disciples’ surprise when they pulled in the net bursting with fish.

But my favorite story of all was the one about Daniel in the lions’ den. It had all the elements of a good narrative—high drama, the whiff of danger, a few villains, a hero to cheer for, a happy ending, and zoo animals, to boot. I loved the part when the king came to peer over the edge of the den the next morning to find out what had happened. (Cue Flannelgraph image of cuddly lions with a hint of a smile on their feline faces, with a serene-looking Daniel using them as so many body pillows.)

As I read this account now, many years after my Flannelgraph days, I’m still struck by God’s miraculous intervention and the drama of the story. But this time I’m also drawn to the often overlooked beginning of the story—the reason Daniel got thrown in the lions’ den in the first place.

When Daniel learned that the law had been signed, he went home and knelt down as usual in his upstairs room, with its windows open toward Jerusalem. He prayed three times a day, just as he had always done, giving thanks to his God. Then the officials went together to Daniel’s house and found him praying and asking for God’s help.

He prayed faithfully, three times a day. Even when it was illegal—and potentially deadly—to do so.

And his prayers weren’t just “Thanks for this bowl of Cheerios” or “Now I lay me down to sleep” or “Please, God, let me make it through this stoplight.” No, we’re talking real, extended times of prayer when he got on his knees, thanking God and crying out to him for help (Daniel 6:11), when he confessed the sins of his people and interceded on their behalf (Daniel 9:1-11).

And all this got me to wondering: Would there have been enough evidence to throw me in the lions’ den? 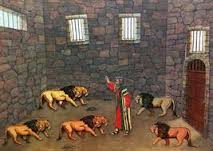 How often am I guilty of drive-thru prayers, shooting up brief, halfhearted thoughts in God’s direction, rarely setting aside intentional time to sit in front of the window and pray, Daniel-style?

I have a long way to go to become the kind of pray-er I want to be. But if they ever made a Flannelgraph image of me one day, my dream is that it would be of a woman sitting by the window. On her knees.

I’ve taken the challenge of reading the Bible chronologically this year and tracing the thread of grace through it. These musings are prompted by my reading. I’d love to have you join me: One Year Bible reading plan.

5 Responses to “They Wouldn’t Have Found Me Guilty”